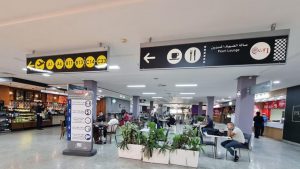 These include the presentation of the COVID passport and PCR tests with negative results, as well as antigen tests on arrival at the airport

The Moroccan authorities have announced the reopening of their borders for tourism and with it, the announcement of new security measures. This reopening has brought with it the resumption of flights as of 7 February after having kept its borders closed for two months as a result of the expansion of the Omicron variant.

According to the Moroccan media Rue20, the measures to be taken by visitors have been classified into three lists (A, B and C), depending on their country of origin and the epidemiological situation in the country. In the cases of list A, a total of 83 countries including Spain, travellers will only have to present a COVID passport in order to enter their national territory, while those from list B, 77 countries, will have to present a negative PCR test carried out less than 48 hours before boarding the plane, in addition to the COVID passport. In addition, all travellers will have to have a document called a “passenger health card” which will include the traveller’s details, two telephone numbers and the address where they will be staying during their visit.

It should also mention the countries visited during the last ten days, the vaccination received, the number of doses and the cities of transit.

On the other hand, according to the Moroccan Government, once travellers arrive at the airport, they will be tested for antigens and will be subjected to a double examination by thermal cameras and thermometers. At the same time, PCR tests will be carried out randomly on groups of travellers, who will be informed of the results at a later date.

According to the Ministry of Health’s new update, in case of a positive antigen test, both Moroccans and tourists will be subjected to a 10-day quarantine and the authorities themselves will not allow them to enter the country. In addition, they point out the need for travellers to adhere to the imposed health protection and prevention measures, including the use of masks, keeping a safe distance and cleaning hands.

These measures will be implemented for those over 12 years of age, while children between 6 and 11 years of age will be required to provide proof of a negative PCR test certificate, regardless of the country of origin. Children under 6 years of age will not have to comply with any of the access measures mentioned above.

According to the statement of the Ministry of Health, the reason for the implementation of these special measures is the need to continue to reduce the risks of a resurgence of COVID in Morocco, following the rapid epidemiological spread of the Omicron variant.